Let’s just blame my lost NaBloPoMo week on Myriam’s 6-week growth spurt, shall we?   I sat down and blinked and blah blah blah BAM.  After nursing away all my spare time and energy–and gaining what must be an additional 10% of her body weight, suddenly my very hungry caterpillar is 7 weeks old.

To say she grew suddenly while I just blinked is a cliche, I know.  I didn’t even manage to leave the apartment building from Monday through Saturday, so you’d think I would have some extra time to use.  It’s just that I don’t know where it went.

I mean, I went from this:

in a day.  Or was it the other way around? 😉    Note: No, the baby didn’t change that much in a day– I’m with different daughters in each photo.

The upshot is that we made it to 7 weeks.  Yesterday even marked the first time I made it upstairs to the fitness room and also, later, to the salon.  Which, yes, meant I actually even left the building!  Newborn parenting FTW! 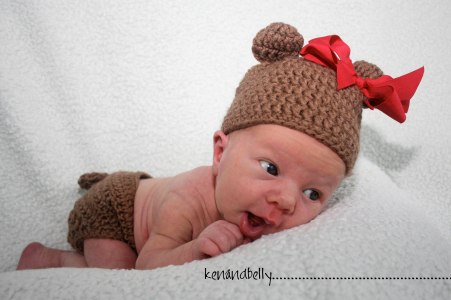 They say babies don’t really smile till they’re a couple of months old. Well. Whoever “they” are, they’re wrong.

“Sleep like a baby”
is bullshit. You help us dream,
dear, sweet full swaddle.

Today, I stood in line for almost 2 hours to cast my vote. I wasn’t alone (obviously).

I was proud to be surrounded by so many other members of our community.

It’s a great thing to be able to vote for our country’s leaders. I’m glad my two daughters were with me at the polls. It’s sobering to think that women have had the constitutional right to do so for less than 100 years. And exciting that so many were elected today.

Only 4 or 5 more elections to go until these two can vote for president, too.

Since I knew we already liked all-in-ones and would use them again when Myriam got big enough, I decided to experiment with the newborn diapers to find out if there’s a system or style that we like better.  We went with cotton cloth diapers with wrap covers.  I got a little of everything: chlorine-free prefolded, organic prefolded, and fitted styles of the actual cotton diapers, and a fairly wide sample of different covers.  None of the wrap covers stand out as my favorite, frankly.  The thought is that the wraps can stay clean/get reused through several changes of cloth diapers, but I’ve found that they all get dirtied at about the same rate.  Hey, its hard to keep breastfed baby poop contained.  It often makes it past the cotton layer, but only occasionally gets out of the cover, too.

This approach definitely kept a pile of newborn diapers out of the landfill, but probably won’t save us $$ long term.  If Myriam was a 6-pound, Jayne-sized baby, we would have gotten a lot more use out of the newborn cloth diapers.  Myriam, however, is an 8-pound, Myriam-sized baby who will be ready to wear all-in-ones far earlier than I predicted.  It’s already becoming hard to get a cotton prefold closed with a snappi  (which is fine, really, as we tend to just fold the prefolds in thirds and lay them inside the cover.  ‘m not really sure why they call them prefolds– they’re not, like, folded in advance).

Basically, I’m looking forward to phasing out the cotton diapers.  Overall, they’re just more fiddly.   Our high efficiency dryer has a hard time getting them truly dry, sometimes taking 3+ of its “smart” drying cycles (it thinks its done before it is).  I also don’t like how the cotton holds moisture next to her skin–  and I especially dislike having to remove a pee-soaked fitted diaper because here’s no way to avoid touching the soaking wet parts when we unsnap them.  Some of the covers seem to always leave red marks.   And, perhaps most importantly, they’re harder to put on.  Both Ben and I would be terrible at getting these on an older baby who knows how to wiggle around.  Ben already dislikes these so much he generally passes them up for the disposables we keep on hand.  I think we get more blowouts with disposables, though.  I’ll stick with these till she outgrows them and then will probably transition back to the all-in-ones we like better.  Maybe we’ll use the prefolds to double up with the polyester liners.

Okay, so that brings me to the tip section that M asked me for in the first place.  Here they be:

And… that’s where I’m going to stop for now.  Let me know if I missed something or if you have questions!

My friend M asked me for some cloth diapering tips, cause she knows that I like our family to do our bit for the environment. Also, we like cute things.

First, some background. I initially got into cloth diapering when Jayne was 18 months old and did so because of the cost savings. We were moving from the US to the UK at the time, and my research about living expenses made cloth diapers seem like a financially responsible choice, given the dollar-to-pound conversion rate at the time and the cost of UK disposables. Paying US prices for cloth diapers we could pack with us became pretty attractive.

Also, we were determined that, unlike our American apartment, our UK flat would have a washer/dryer, which would make cloth diapering a feasible option for us fur the first time. No way, no how were we going to start lugging more laundry to the common facility in our apartment building. We had THAT principal reinforced when we tried hybrid diapers (namely gDiapers). Although I liked the environmental advantages of flushable inserts, IMHO, cloth diapers with paper inserts were the worst of both worlds. Extra laundry, extra cost, and the extra work of always having to remember to get more before we ran out. Boo. So, it was all or nothing for us.

After reading reviews, I purchased a dozen BumGenius diapers. They’re pocket diapers, which means they have a waterproof cover with a pocket that holds cloth inserts. When it comes to getting the thing actually ON a kid, pocket diapers are as easy as disposables. Only cuter.

That dozen was all we needed for our older toddler if we did laundry no more than every 3 days. We used them until Jayne was far enough into potty training to demand pullups. Prolly could have used them longer except that she figured out how to take them off and refused to wear them because she wanted to be a big girl, with pullups to match. (She would have done the same with the tabs of disposable diapers, too.) I suppose cloth diapers with snaps instead of hook and loops (i.e. velcro) closures might have helped with that, but it was silly to invest in more diapers at that point.  Some people just put the diapers on with the velcro in the back at this stage, but there was no fooling Jayne.

We were very happy with the pocket diapers. The polyester of the inside pockets seemed to wick moisture away from her skin, which kept her skin rash free (to the best of my memory). We didn’t have trouble with leaks or blowouts (again, to the best of my memory). They held up really well. They did collect some weird pilling inside, but I think that owes to our UK washer/dryer. (For those who don’t know, European machines are generally all-in-one machines– once the water drains from the washer, you dry things in the same drum. None of the machines in any of the three apartments we eventually had in the UK had good lint filters, so I blame the pills on the machines not the diapers (especially since the pills are the color of Ben’s socks, and many clothing items got them). They didn’t impact the function).  ETA: with regular washing in our current machine, the pills have gone away.  It was definitely the UK machine.

In short, I’m looking forward to using our pocket diapers again with Myriam.

However, we aren’t using them yet with Myriam. I’ll admit that I’ve been eying them now that she’s up to 10 pounds. I’ve tried them on her here and there in the last couple days, but even adjusted to the smallest setting, they’re comically big on her. It’s difficult to get her 0-3 month clothing on over the bubble butt they give her.  And it doesn’t look comfortable when we lay her down.

Good thing there are lots of other cloth options for diapering newborns. And, not only have I tried out a good many of them, I apparently have much to say about them before I start doling out the tips M asked for.

Since I also have a newborn to feed and, hopefully, a much better night of sleep to be had tonight than last, I’m going to save that blog fodder for another post. I’m pretty sure my friend M will understand.

Time in Newbornlandia is relatively relative. Even though this post may get a Sept. 4th date stamp, I’m drafting it during the first couple wakeups of the night. There’s a gray zone between days here, and I’m going to call this one a NaBloPoMo success.

So, since it’s day 3, here are 3 memorable things from November 3rd:

1. 2 goals— our day started at the elementary school soccer field, from which the sun retreated the minute we stepped foot on the grass. Jayne’s face lit it back up though, twice. Her first AND second goals EVER went in.

2. Date night–Thanks to my babysitting in-laws, Ben took me to the NBA opener at the Verizon center tonight, where we watched a miserable first quarter become an exciting last second, one point loss. Ah, well. The delicious pumpkin martini I enjoyed at Ella’s after the game was sweeter than victory.

3. Myriam’s wakeups tonight— were plural…but i guess i could say that at least they were on the shorter side. (still, the plural part’s not especially good for my memory or other cognitive functions. Guess its a good thing I have a blog, huh?)

The problem with posting infrequently is that it creates pressure to write something Momentous/Significant/Requiring Deliberation and Wordcraft.  You know, things that should be capitalized.  A birth story to make ya cry and laugh, deep thoughts about second-time parenthood, etc., a five-act treatise on natural childbirth in an American hospital setting, and yadda yadda.

Between the new parent fuzziness and the aftereffects of the pace I upheld at work throughout my pregnancy and, oh yeah, the dissertation defense at the start of the pregnancy, my synapses are not yet recovered enough to fire at anything approaching that level.

So.  Imma gonna try burning off the burnout and dust by reprising an old exercise: NaBloPoMo (National Blog Posting Month).  I’m going to make no promises about sticking with chronology, or minimum word count or anything like that.  But.  I am going to aim for 30 posts in 30 days.